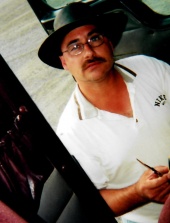 It is with heavy hearts that the family of David Cook announce his passing at the Englehart and District Hospital on July 31,2022 in his 63 year. David was predeceased by his father Larry Lorraine Cook Step mother Ina Cook Survived by Amanda Smith Sister Donna Knight( John) Brothers George(Mary), Barry(Shirley), Brian(Barb), Roy(Monika), Robert(Carol) Step sons Allain and Jamie Gravel Mother Jean Children Sarah,Stephanie and Mitchell David was born and raised on a farm in Logan twp just outside of Mitchell On. David drove farm machinery from a young age helping his father with their farm and also custom work, this is where he found his love and passion for running machinery. The Cook family moved to Charlton in 1978 where they had a farm on the old Charlton hwy. David worked for his father on the farm until he got a job with the Ontario Northland Railway. Got married and had 3 children. Later on in life he acquired his AZ license and drove for various trucking companies, traveling throughout Canada & United States. Cremation has taken place,there will be no service at this time. Please feel free to make any donations in David's name to Home Front Mission in Englehart.

Brian and Barb, Barry and Shirley, Donna and John, and Robert and Carol

We are so sorry to learn of the passing of your brother. We extend our heartfelt sympathy to you and all of your family.