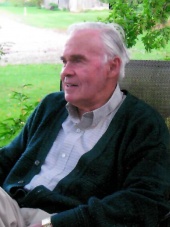 Delbert Morley Lenover passed into his Saviour’s arms on January 15, 2022, at Extendicare Tri-Town Nursing Home in Haileybury, Ontario at the age of 96.

He is survived by one sister Louise, and children Derrick (Linda), Sharon Littlejohn (Richard), Mark (Camille), Pauline Corlett (Chris), and Lisa Wood (Ian).  He had 13 grandchildren and four great-grandchildren.

Del farmed all his life.  He was the fourth generation to operate the family farm in Kent County.  In 1976, after selling the farm to his son Derrick, Del and Ada moved to Hudson Township, Timiskaming with their son Mark and two youngest daughters, Pauline and Lisa where he continued farming until his retirement.

The family would like to express their gratitude to the wonderful staff at Extendicare.  We appreciate the excellent care you gave Dad while he was with you.

The funeral will be held at a later date.

It was not a surprise to receive the notice of yr father’s passing, but to lose both parents within a matter of month is doubly sad. I am so sorry to hear of it. He was such a kind and honest man, a good uncle and loving father. His modesty and willingness to laugh in life made him an endearing person. I can hear his laughter still. I hope that difficult times such as these will give way to good memories of such a wonderful and spiritual man. I’ll always remember him this way.
Much love,
Joan Martin (niece)

We are so sorry for your loss. Lots of great memories in Kent County with Del & Ada & the family. Sending our sympathies at this sad time. Love & Prayers, Murray Johnston & girls

Sorry for the loss of your dad .He was always a man I felt that put alot of thought in answering a question you might ask him. There sure were a great number of happy memories made. I know your dad will be missed by everyone.

Thinking of you during this sad time. May you all continue to cherish the many memories you shared over the years .

As your x neighbour we would like to offer our sympathies at the passing of your Dad. Marie-Paule and Rheal Beland