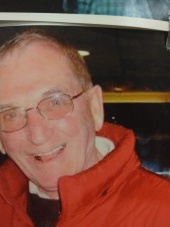 It’s with great sadness we announce the passing of Guy Fiset at the age of 91.

Guy was born in Montreal, Quebec.

Guy was pre-deceased by his parents Henry and Cea (Richard) Fiset, his wife Marie (Clements) along with his brothers Henry Jr, Peter, Normand and Claire.

Guy and 2 of his brothers (Norm and Roger) took over the family logging business from their father Henry and have now passed it on to the next generation of boys. Guy enjoyed the outdoors, working in the bush, ski-doing, 4-wheeling and hunting.  And always had a story to tell you about one of his adventures.

He will be greatly missed by his family, friends and many nieces and nephews.

In keeping with his wishes, cremation has been arranged with Timiskaming Funeral Cooperative and a Celebration of Life will be held at a later date.

We were so sorry to hear of Guy's passing. Our sympathy to all the family & friends.

Our sympathies in the loss of Guy, may your memories bring you comfort!

We are so sorry for your loss. Our thoughts and prayers are with you.
Love, Gord, Nancy, Sandy & family and Scott & family

I am so sorry for your loss. My sympathies to you and the family.

My condolences to you both at this difficult time! I’m sure our dads are looking down on us but grateful they are together. Love Mike Fiset and family

I am so sorry for your loss. You are in our thoughts

Sherry, I am so sorry to hear of your dad’s passing. May you find strength and treasure your memories in days to come. Hugs!

Sherry and the entire Fiset family

Sending my most sincere condolences to all who are affected by his loss. RIP Guy