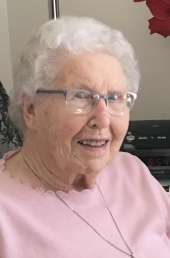 With sorrow for our loss, but joy for her gain, Helen Marie Hartford, went peacefully home to heaven
late Thursday afternoon, September 15 at Temiskaming Lodge in Haileybury at 93 years of age.
Helen was predeceased by her loving husband Barney (Byron Leroy) in 2015, after a long and happy
marriage of 68 years. They lived in Ingersoll, London, Burks Falls and Englehart.
She is survived by her two sons and their wives, 5 grandchildren and 17 great grandchildren.
Dan and Arlene (Onuoha) of North Bay, Dan’s two daughters from hisprevious marriage to Lorrie
Addison (deceased): Christine Kuehl (Dan) of North Bay with their children, James, Peter, Skye and
Navy; Lindsey Lawrence (Adam) of Burks Falls with their children, Lexi, Toban, Nate, Ava and Charlie.
Helen considered Arlene’s three children, Rebecca, Urey and Agwu David (Jolene) Onuoha as a gift of
additional grandchildren and was thrilled when great-granddaughter, NnennaElise, was born to David
and Jolean.
Ron and Judy (Robinson) of Elk Lake and their children: Rebecca Nininger (Jesse) with their children,
Jonathan, Justin and Aaliyah of Hutchinson, Kansas, USA; EmilyCoste (Abel) with their children, David,
Oliver and Levi of Sudbury, Ontario; Luke Hartford (Megan) with their children, Ellie Grace and Patrick,
also of Sudbury, Ontario. It gave Helen great happiness to know that baby Patrick’s (born August
26/22) middle name would be Byron and that he would carry on the Hartford name.
Helen was born on a farm near Thamesford, Ontario, to Edith and Earl Mercer on April 26, 1929,
joining an older sister, Margaret, and later followed by Dorothy and Don. She enjoyed country life
and tending her flower gardens. For many years she walked 3 miles a day with her best friend. Her
extended family of sisters and brothers, sisters and brothers in law, and nieces and nephews were all
special to her as friends as well as family. She and Barney lived for 30 years in a house that they built
together on 100 acres near Sprucedale, Ontario before moving to Englehart. Most afternoons she
spent working on a quilt and evenings were set aside for knitting. All the grandchildren
receivedsweaters knit with love and also most of the great grandchildren. Her quilts won the grand
champion prize at the Burks Falls Fair for so many years that she was eventually given the trophy
permanently.
Helen loved and enjoyed her grandchildren and later the great grandchildren. She especially enjoyed
when they would visit and sing or play an instrument for her. Facetime piano concerts from her great
grandchildren in Kansas were an extra special treat. The youngest great grandchildren have happy
memories of riding on her walker which she called her “4-wheeler” at Northdale Manor during the
years that she lived there.
Helen came to love and know the Lord Jesus as her saviour in a much deeper way in her later years.
She was looking forward to more bible reading and study time this winter. However, the Lord had a
better plan and she now knows and sees Him face to face.

A memorial service will be held on Saturday, September 24, 20222 at 2:00 pm at Bethel Gospel Chapel
in New Liskeard.

John 10:4 And when he puts forth his own sheep, he goes before them, and the sheep follow him:
for they know his voice.
John 14:3 And if I go and prepare a place for you, I will come again, and receive you unto myself; that
where I am, there ye may be also.
A special thanks goes to Northdale Manor and Temiskaming Lodge in Temiskaming Shores for the
wonderful care that she received over the last six years. It was the workers that made a difference in
her life.

Our deepest condolences to you all at the passing of your lovely mother, my Aunt Helen. Oh I loved her and your dad so dearly. So happy they are together now. Sending hugs and prayers of comfort to all.

Sorry to hear from Beth about the loss of your mother. Your in my thoughts.

Sorry about the loss of your mother (in-law), grandmother and great-mother. Absent from the body present with the Lord. You’re in my thoughts and prayers during this time.

I’m so sorry to hear of Helen’s passing.

I’m sorry to hear of Helen’s passing. She was a very special lady that I enjoyed caring for when she was living at the Manor. I was saddened when she moved to the Lodge.

Dan, Arlene & all the family

So sorry to hear about your Moms passing, she was a great lady, nice to get to know her when your parents lived in Englehart. Condolences to all.

Dear friends,
My deepest sympathy in the loss of your mother and a great grandmother she was.
I only met her since she moved in our area, but I enjoyed her visit home with Judy.
I have find memories of her quilts.
A friend, Denise Laurin