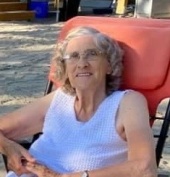 In her 84 th year, Helen passed on to glory peacefully in her sleep at Tri-Town Extendicare, Haileybury.
Pre-deceased by her husband, Philip, and daughter, Gwen, she is survived by her children: Paul Potter
and wife Lorraine with children Hilary and Nicholas; Marilyn Potter and children Wayne and Wendy; and
Barry Potter and wife Liz with children Wyatt and Sally and Emily Seed and husband Jason.

Upon completing grade 11 at Englehart High School, Helen started work at the Royal Bank in New
Liskeard. After marrying Philip Potter, they moved west of Earlton to farm together and raise a family.
Later she worked in both the Temiskaming Shores and Englehart medical communities.

Helen was a friend to many, and was actively involved in volunteering for many activities, including
church functions, local fairs, and the cancer patient section at Temiskaming Hospital. She was a survivor
of breast cancer, and afterwards provided hope and comfort to those who were stricken with the
disease.

Mom loved to enter the local fairs with home crafts and baking. She and her good friend, Kathy Richards
would have friendly competition. They enjoyed working together to get entries ready for the fairs,
helping to support local events.

Her homemade Chelsea buns and butter tarts were not only enjoyed by all who visited her home but
were also often donated as hot-ticket items for fundraising causes, such as the Temiskaming Beef
Buddies 4H Club.

Mom was a supporter. She didn’t really like sports, but she attended Paul and Barry’s legion of games:
soccer, basketball, track, whatever was going on. Her prayer was that her children would have fun, but

that they would never be too good at sports and thus be distracted from the main life goal of serving
Jesus Christ.

When her grandchildren were involved in an activity, whether music festival, hockey, 4H, or a school
activity, they could count on Grandma to be there cheering them on.

The family would like to thank all of Mom’s friends for their visits and care over the years. We would
especially like to thank the Englehart Hospital and Extendicare Haileybury for their professional care
over Mom, especially during the challenges of the pandemic.

Mom lost the love of her life, Philip, almost three years ago, and has been waiting to be reunited with
him and to be with her Lord and Saviour, Jesus Christ. God answered her prayer on May 27 th .

The family will be holding a private burial at the Earlton Gospel Hall cemetery. A public memorial is
being planned for later this summer, tentatively scheduled for August 13, 2022.

Donations to the Canadian Cancer Society, or another charity of your choice will be gratefully
acknowledged by the family.

To the Potter family

We are saddened to hear of the death of Helen, but we know that she is with our Lord and Saviour, Jesus Christ. Ron & Anne Bailey

Our sympathies to you and your family at this time. Let your cherished memories comfort you at this time. Take care because we care❤️

Sincere condolences. Helen was always very kind to me.

Sincere condolences to you on the loss of your dear mother. We are so glad to have known this remarkable and godly lady.

Think of you and hoping your memories of special times with your Mom and Grandma will bring you comfort.
Trudy Houghton (Plaunt)

The Potter and Fergusson Families

We are sorry to hear of the passing of Helen. She was loved by all who knew her. Condolences to all. You are in our thoughts and prayers at this time.

So sorry for your loss. My thoughts are with you.

Helen will be missed by many. What a beautiful story you have written for your Mom. She would be pleased. Whenever I met her, she was always smiling. Another beautiful Angel ending her journey....

I was saddened to read of Helen's passing. Such a lovely lady. I so enjoyed my chats with her and also her help when she volunteered for me in our homecraft section of the New Liskeard Fall Fair. She lived a full life. Treasure the memories.
Sincerely, Barbara Cunnington

Was such a pleasure to have met your Mom before her passing and I'm sure it was a comfort for her to know what a loving family she was able to leave to support each other during this time.

The Potter and Fergusson families

No doubt Helen was a beautiful soul and a treasure. I will always remember her warm and caring nature. She was full of joy! I am glad that she and Philip were a part of my life. Sending all my love, Erin

Our sincere condolences are to Barry and Liz, as well as the rest of the Potter family.

Helen had an interest in people and her love of different crafts-quilts, embroidery, baking and more.
Helen will be greatly missed.

I was sad to hear the passing of Mrs.Potter, she was such an amazing and inspiring woman. Every time I would see her she always took the time to exchange a few words with me. Such a nice lady! She will certainly be missed by her family!