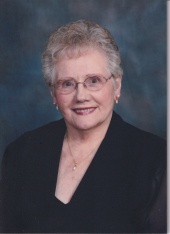 Born November 18th 1934, Jeannette Léveillé crossed over May 9th, 2022 at the age of 87, after a battle with Alzheimer and arthritis.

Jeannette was an extraordinaire homemaker, an awesome chef and seamstress.

She was a founding member of the Union Culturelle des Francophones de l’Ontario of Earlton, member of Paroisse Saint-Jean Baptiste d’Earlton, Club de l’Âge d’Or and part of the choir Les Frantasistes.

Upon retirement, she found a new hobby with her husband, they had a small quilting business.

The funeral service will be conducted on Saturday, May 14th, 2022 at 11 a.m. from St-Jean Baptiste Parish in Earlton with Father Germain Turcotte officiating.

In memory of Jeannette donations to the Alzheimer’s Society of Canada or Arthritis Society would be greatly appreciated.

Jeannette will be fondly remembered by family, nieces, nephews, friends and community members.

The family would like to extend its gratitude and special thanks to the whole team of the Temiskaming Lodge for taking care of mom the past few years.

Condolences to Yvan, Caroline & Family sorry for your loss of your Mom

The family of Jeannette Leveille

We were saddened to hear of the passing of Tante Jeannette. The last few years have been a struggle for her and the family . Take comfort in knowing that others feel your loss and that she and Oncle Ernest are together together again for eternity.