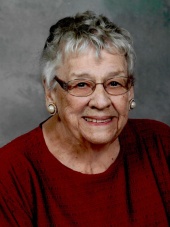 Born in West Hartlepool, England Joan spent her childhood in Kirkland Lake. After completing high school, Joan attended the Mack Training School for Nurses in St. Catharine’s, graduating in 1950. She spent several years as a community health nurse in Ontario and Nova Scotia and spoke fondly of her experiences and the people she met.
She moved to the U.S. where she worked in Philadelphia and Baltimore as an operating room nurse/supervisor. On her weekends off she would go for drives in the countryside. During one such trip she saw someone skydiving and decided she “had to do it”. After a
newspaper article was published about her new hobby, she became known in the hospital as the “skydiving nurse”.

1967 found her returning permanently to Kirkland Lake after the death of her father, Thomas Hudson. She worked at the Kirkland Hospital until her first retirement in 1989. Later she worked as a nurse (Adam’s Mine) and volunteered for the Canadian Cancer
Society and St. Peters Anglican Church until well in to her 80s. She travelled during this period spending time in Europe, India, Greece and Turkey.

Joan loved to read so she was well known at the library. While she preferred mysteries and science fiction or fantasy anything well written was acceptable. She was introduced to her Kindle in 2012 with which she had a love-hate relationship. She loved the size
and convenience of it but hated it when it wouldn’t do what she wanted - which was often. She attended aquafit classes until she was 91, when the classes were closed due to Covid 19.

Joan was predeceased by her parents, Thomas &amp; Alice (Pierce) Hudson, her sister Winnifred (Freda) Sikorski and her brother Norman. She is survived and will be missed by her nieces: Rita Hudson (Ross) Kean, Sandra (John) Ivanauskas, Tammy (Henry)
Grant and her nephews: Steven (Kristy) Hudson, Bruce (Barb) Hudson and Robert (Shelley) Hudson, her 11 great nieces and nephews and 11 great-great nieces and nephews.

The family will be eternally grateful to her close friends, Clarise McDonald and Alison (Glenn) Whyte, for staying with her during her final days when we were unable to be there. The family would also like to thank the doctors and nursing staff at the Kirkland Hospital (forth floor &amp; Palliative care) and Timmins Hospital (Orthopedics) for their excellent and compassionate care of her during her last weeks.

In lieu of flowers, donations can be made to the Canadian Cancer Society, The Canadian Diabetes Association or the charity of your choice.

We were neighbours of the Hudsons for many years on Lakeshore Property (122 Government Road West). RIP Joan.

I worked with Joan when I first started at the Kirkland and District Hospital many years ago as did Bill. Her stories and laughter will be missed at our nurses monthly luncheons. Our sincere condolences to her family. Heather and Bill Bailey

Joan was a much loved and a long time parishioner at St. Peter’s Anglican Church. On behalf of St. Peter’s, our deepest sympathy to her family.
Vivien Clarke

I’m sorry to read of Joan’s passing. I will miss her at aquafitness. Rest In Peace Joan

Sad to hear of Joan's passing... She was such a delightful and engaging individual who oozed jest and zeal for Life and always had a cheerful word and sincere smile to share.

I was very sorry to hear of Joan's passing. I first met her at The Saint Peter's quilting group and have known her for many years. My sincere sympathy to the family and her dear friends.
Ines Robazza

So sadden to hear of Joan's passing. Worked at KDH for many years, new her well.
We had fun at aqua fitness she was still coming right up till Dec of 2021. Amazing lady. Will be missed. Rest easy my friend.