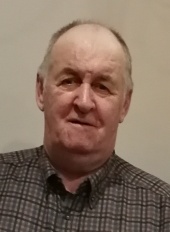 It is with sadness that the family announces his death on Monday, November 14, 2022 at the Temiskaming shore hospital at the age of 73. Pierre succumbed to prostate cancer and dementia. He joins his parents Roland Verrier and Hélène (Michel) Verrier, and his two brothers Léonce Verrier and Hector Verrier. He leaves his wife of 51 years of marriage, Francine (Jacob) Verrier. These four children, Martin (Carolyn) Verrier, Dominic (Lynn Milot) Verrier, Mathieu (Jennifer) Verrier and Dany (Amy) Verrier.

Pierre enjoyed listening to the stories everyone had to tell and also being social with everyone. He loved seeing all these little children chatting with forest stories while smoking his cigarette. He enjoyed working in carpentry and taking walks in the woods with his wife.

For those who wish, instead of sending flowers, please make donations in his memory in favor of cancer and dementia (Alzheimer's).

I'll always remember going to elk lake to sleep over at my grandparents place and cherishing every moment of it, opening a bag of doritos at night in front of Grandpa (while he was lounging in his lazy boy with Sophie was curled up on his belly) where he'd smell in disgust saying that they smelt like dirty socks. Waking up in the morning and going down to the store in the truck to have a cup of French vanilla while my grandfather would get a coffee and smoke a cigarette while shooting the shit with the town folk. Having him come to my hockey games and after always getting a toonie from him to get something from the canteen or even in elk lake to go get a chip n and pop. I'll always remember as kid a memory amongst others that stick with me was when Coffee time in Englehart had their smoking room he'd always bring me in their when he'd have his coffee and cigarette while chewing the fat with people in there, would always walk out smelling like a carton of smokes, but would do anything to live that memory again. I always felt so proud and loved when he would call me "My Boy" and the last cigarette I and he ever had he called me that one last time not knowing that'd be the last time I'd hear that... I'm going to miss hearing that my grandparents are coming over for a visit where I'd get myself ready, get coffee ready and to be excited when they pulled in to greet my grandpa and grandma with a handshake and a hug and to ultimately have a cigarette with grandpa. I remember him saying to my dad over the phone I'm coming over to have a cigarette with my boys.. it was devastating to see my grandfather take his final breaths but I knew then and there my grandfather was already gone and that was not who my grandfather was in that hospital bed. There's just to much I can say about my grandfather to put here, so as he would and would want me to do I'll talk someone's ear off at his celebration telling them my memories and how perfect of a grandfather he was and will continue to be in my memories and heart.

I love you so much grandpapa and I will see you again. Have a coffee ready! ☕️

Our sympathy to all the family & friends. Thinking of you all!

My sincere sympathy in the passing of your brother.He will be greatly missed by all who knew him.