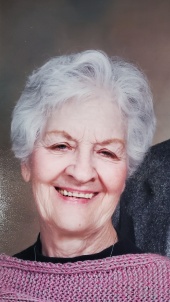 With great sadness, the family of Jean Marie Fernande Jackson (nee Chaylt), announces her passing at age 87 on June 17, 2022. She died peacefully in her sleep at Temiskaming Hospital.

Born to Donat and Rose Chaylt in 1935, Jean and the family moved frequently for her father’s work on the railroad. They lived in communities in Northern Ontario, including Elk Lake, Krugerdorf, and Coral Rapids, before settling in Englehart. Jean was christened with the name Jeanne and her twin brother was named Jean. (John)

Jean met the love of her life, Roy when she moved to New Liskeard in the early 1950’s.

Jean’s loving, kind and generous nature was appreciated by the many friends and relatives who knew they were always welcome to visit and stay over.   This invitation was extended to many of her children’s friends too. (And sometimes included a spaghetti dinner for up to 18 teenagers!) Along with raising her family, Jean spent her life as an avid gardener, seamstress, and crafter, who also worked in a few retail stores in New Liskeard. Jean loved going to thrift stores and finding treasures to share from garage sales. She also drove a 72-seat school bus for a few years!

Jean had many wonderful memories of spending time with Roy and her family at their cottage(s) in the Temagami region. She was involved with the Catholic Women’s League at Our Mother of Perpetual Help Church for many years. Her faith led her through numerous challenging times and allowed her to see life’s blessings, big and small.

For the last few years, dementia robbed her of some new opportunities, but she never lost her sense of humour and her kind, loving personality. Jean will continue to live on in the hearts of those who called her mom, grandmother, relative, and friend.

The Funeral will be being held on Tuesday, June 21, at 11 am at Our Mother of Perpetual Help Church. Visitation is Monday, June 20, 6:15-8 pm at Perrin Funeral Home in New Liskeard.

The family would like to thank the staff at Temiskaming Hospital and Jean’s special friends Linda Whitehouse and Genevieve LeClair for their love and care.

Donations in Jean’s memory can be made to Zack’s Crib or local food banks.

Our heartfelt condolences to you and your family. You are all in my thoughts and prayers. May your memories help you through this difficult time xo

Jean was a wonderful lady. My special friends mom and had a beautiful family .My condolence to all

Your Mom was a lovely lady.

Uncle Roy and all the family

We are so sorry that Auntie Jean has passed. She was very loved by many and will be missed for so many reasons.

As a young lady Auntie Jean welcomed me to come visit “up north” during the summer holidays both in New Liskeard and in Cochrane. This fostered the development of a special relationship she and Roy but also with my Jackson cousins. For this I am so thankful and so very grateful!

In the past decades Bill and I have enjoyed summer our visits with both uncle Roy and Auntie Jean sharing a coffee at the dining room table catching up on the past years activities and family news.

Auntie Jean had the best smile, warm heart and eyes that twinkled.

We will miss our visits together but will cherish all our memories of this wonderful woman and hold her close in our hearts.

I know she will be greeted in heaven by so many that have gone before her with open arms and a live that never ends.

So sorry to hear of your loss of a wonderful lady. Prayers and hugs to you all

We are saddened to hear of the passing of your mom. Our condolences go out to you, Shelley and your family, Mr. Roy Jackson which I had the pleasure of meeting, as well as the entire Jackson and Chaylt families. May her memory be a blessing.

We were so sad to here of the loss of such a kind and warm hearted woman who always made us feel welcome in her home so many years ago. Our hearts go out to the family. We are thinking of you all at this difficult time. Love, Linda, Barry, Morgan and Callan xx

Mike, Mary, Patti, Shelley and all the Jackson family

Really sorry to hear about Mrs. Jackson. She was always the sweetest and kindest lady.
Sincere condolences.

Heartfelt sympathy to all of for the loss of your beautiful Mother... Sincerely from the Bowes family...

Our sincere condolences to all the family may your memories help you through this difficult time.

Years have passed, but memories remain. I am saddened to hear of your mom's passing. She was a wonderful lady. As Irving Berlin once said, "The song is ended, but the melody lingers on." Let that melody play on forever in your hearts. With my deepest sympathy.

Jennifer, my thoughts are with you & your family during this difficult time. You are in my prayers.
My deepest condolences

Sending love and condolences to your family during this difficult time. A beautifully written tribute.

Your mom was such a beautiful person. You will miss her but is now in peace. May your memories get you thorough this difficult time. Sheila conroy

Although flowers wither, die and disappear, their precious perfume remains. Like these bright flowers, those we love never die, they remain with us forever imprinted in our memories.
Jean was a beautiful person inside and out. A real treasure to know.
Thinking of you during this sad time.

Warm thoughts of sympathy are with you and your family, along with a prayer that God will be especially close to you in the days ahead. She's home now with the Lord

I am so sorry to hear about the passing of both your parents. It's doubly tragic. You're in my prayers, and you have my deepest condolences

Sincere condolences to
Roy and children, grandchildren and great grandchildren from Dorothy Dodds and Peggy Beauchamp.
May all your great memories carry you through your loss.

We are so sorry to learn of Jean's passing. We haven't seen her for a long time, but she was always such a nice lady. We extend our deepest sympathy to you and all of the family.

Dear Roy, Joanne, Darlene, Jennifer, Patti, Michael & Mary
We were so sorry to read the news about Jean’s death. She was a great woman of Faith & a beautiful wife, mother, grandmother, great-grandmother & friend. She will be deeply missed by all of you.
Your are in our thoughts & prayers.
May Jean Rest In Peace

So very sorry on the loss of your Mother. Our sincere condolences

Please know our thoughts are with you both at this difficult time.

Jennifer, Marcel and all your family

Deepest sympathy
Embracing you with love, Barb and Scott