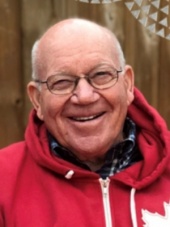 It is with great sadness that the family of Jack (John) Royal announces his passing peacefully, on July 7 th , 2022 at home with his family, in his 93rd year. Beloved husband to Terri.  Loved father to Chris (Karen), Bruce (Sharon), Laura (Rob), stepdad to Doug and Deb (Steve).  Grandfather (Papa) and Great Grandfather (Great Papa).

His story began on March 22 1930 in Port Colbourne, ON. No stranger to living life to the fullest and taking advantage of every opportunity for an adventure, Jack joined the Ontario Provincial
Police as a Provincial Constable #2321 on September 16 th , 1952 and was posted to Timmins. On April 1 st , 1955, Jack was transferred to the Kirkland Lake Detachment. Jack separated from the OPP on October 17 th , 1961 with just over 9 years of service and then became an insurance adjuster in Kirkland Lake for many years before heading to London- where he resided with his wife Terri. Terri and Jack said “I do” on March 25 th , 1989.

Jack was genuine and driven soul with a legacy that’s not to be forgotten. He was a proud life time member of the Kirkland Lake Mason. He was the founder and lifetime commodore of the
Kenogami Yacht Club and was also an honory member of the Kirkland Lake Legion. Known as a “giant” to some as he coached the Raven Mountain Ski Team &amp; did Ski Patrol. In his later years in London, ON he became known for some of his favourite hobbies such as bread &amp; wine making. He also volunteered at Victory Hospital and was always the “friendly neighbour”, cutting others grass and snow blowing well into his 90 th year. And for those who know, know he was the most “tech savy” Papa around! Jack enjoyed his many trips back to Kirkland Lake fishing and visiting his many friends and family on his favourite lake Kenogami.

Although we are here to celebrate and conclude his story – it doesn’t end here, as it shouldn’t. Carry Jacks sense of adventure and legacy for life with you daily. Embrace the simple moments and live large.

Burial service will be held on Wednesday September 14 th at 1PM at the Kirkland Lake Cemetery. Immediately after we welcome all family and friends to follow for a gathering on Kenogami to “set Papa on his final sail.” Following we welcome all to celebrate Jack at 221 Rogick Road, Kenogami.

Memorial Donations can be made to the Kenogami Sailing Club or the Canadian Cancer Society.