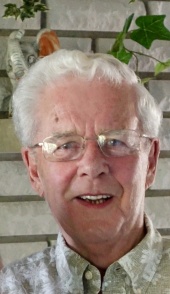 Ray passed away peacefully at home on March 7, 2022, with his wife Connie and family at his side and with him in spirit from afar.  He lived a healthy, vibrant life for almost all of his 91 years, only recently experiencing illness.

Ray was born in Ansonville and raised in Timmins. He enjoyed a lifelong career in the automotive business, starting in the late 1940’s at Rice Motors - Studebaker Dealership.  He then briefly worked at Taylor Hardware before starting his career with Canadian Tire in 1955.  He managed the Timmins store until 1977, then moved to New Liskeard to manage that Canadian Tire through to his retirement in 1985.

Ray and his family enjoyed over 40 years of cottaging at Kenogamissi Lake. He often expressed his gratitude that he had the good fortune to enjoy more years of retirement than years he had worked. He and Connie road-tripped extensively throughout North America with their various travel trailers. He spent much treasured time with his grandchildren and great-grandchildren, and also enjoyed the special relationship he had with neighbourhood “grandchildren”.

Ray derived great pleasure from the many animals in his life - family pets, wildlife visiting he and Connie’s back yard, and the many neighbourhood dogs stopping by for a cookie and a scratch.

Ray was predeceased by his parents, Carl and May (Massales), siblings

As per Ray’s wishes, there will be no service and he has also asked that there be no flowers nor donations in his memory.

Ray and his family are grateful to Dr. Glenn Corneil for 25 years of exceptional care, and also  to Dr. Jean Corbin, Paule Corneil, Carole-Anne from Vital Aire, Isabelle from Care Partners, together with the many others, who helped ensure he was comfortable and his wishes were honoured in his final days.

Moe and I are so sorry to read of Ray’s passing. We were always assured of a friendly smile and a kind word when we met up with him. Please accept our sincere condolences.

Uncle Ray has left a footprint in my heart. Although we didn’t get to see each other often I always looked forward to our visits. There was always lots of laughter when he was around. He was a gentle, caring person and I feel so fortunate to call him my uncle.

My deepest sympathy to all, he will be missed

Mrs. Jones..... so sorry to hear of your husbands passing...hold on to the memories... it will help you get through this difficult time...take care... Marsha and Chase xo

Please know that you are in my thoughts as you go through this difficult time. My condolences to you and your family.

Dear Connie and family I am so sorry to hear the passing Ray
I was so shock when I saw in the paper. i am thinking of you all
Ida always enjoying chat with Ray

Please accept our condolences to all of Rays family
We called him “Mr Jones”, a true gentleman, friend to all the neighbours and the neighbour pets and the neighbour crows, blue jays, squirrels, etc
We will all miss his presence on our street
My walks by his house will not be the same any more
But we will remember him fondly
May you all find peace knowing he no longer suffers and you can cherish all those wonderful memories of family times

So sorry for your loss. Thinking of you and sending ❤️

John and I want you to know how sorry we are to hear about Ray’s passing. For 32 years we enjoyed his company on Cosman Cres.
He was always there to give a helping hand and for treats for all the children and pets.
He was the embodiment of kindness.
We are thinking of you.

Mrs. Jones,
Our family was so sorry to read of the passing of Mr. Jones. He was such a wonderful and kind man. I have fond memories of when you lived next to us on George St. in Timmins. I also remember when we went camping at Kettle Lakes the year before it became a Provincial Park (1958- I think). I also remember going to Canadian Tire with my dad and Ray would give paint stirrers to Don and I.
I always appreciated the friendship you had with my parents.
Please accept our heartfelt condolences to you and your family

Dear Mrs Jones and family
We are so saddened to hear about Mr Jones' passing. He was an amazing man and a wonderful neighbour on George Ave so many years ago. He was truly a special person who will be missed dearly. Please accept our most heartfelt sympathies.

I was deeply saddened to hear of Ray’s passing. He was so generous to share photos and stories of his funny and heartfelt times with our dad, Robert Maxwell.

Sixty-seven years of marriage must seem too brief right now. I pray the memories sustain you.

Alain and I were so sorry to hear of Ray’s passing. We so enjoyed our chats with him as we walked by the house. He was always eager to hear about our camping adventures in the trailer that we bought from him, which we enjoyed for many years with our daughters. Ray will be remembered for his kindness and smile. Please accept our sincere condolences.

Our deepest condolences to you and your family, he will be missed by many, 67 years how wonderful, many memories to cherish, I hope it helps with your grief!

Connie, I was so shocked to hear of Rays' passing. I had no idea otherwise my condolences would not be this late.
You and Ray were always so kind to Larry, my dear Mother and myself and I thank you for that. Your loss will be enormous for sure but hold onto all the wonderful memories you both have created in the last 67 years.
My thoughts and prayers are with you. Ray was a beautiful man and I respected him so much. I so enjoyed running into him around town. I will always remember his beautiful smile and his kindnes.
RIP Ray I am positive Creator guided you safely to your ancestors.
Connie and family, please accept my most sincere sympathies. ❤