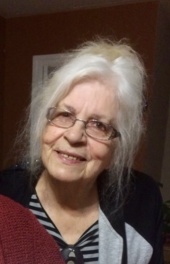 It is with great sadness that the family announces the passing of our dear mother, Thérèse Loranger. After a short hospital stay, she passed away peacefully at her home on May 20 with her daughters by her side, shy of her 91st birthday.

Thérèse was born in St-Maurice, Québec. The family moved to Earlton in her young age, where she was, being the oldest, her father's right-hand man. There is nothing she did not do. In '49 she was married to Jos and together bored ten children within 15 years. Early on, they bought the Loranger dairy farm. Thérèse was a true farmer, a jack of all trade, a vet, a butcher, haying, seeding, bailing, while raising her children. Along side her spouse, she also raised pigs, chicken, and other animals. Thérèse was most hard working, “not a moment to waste. “And somewhat of a perfectionist, to do your best, values she inculped on us children.

In '75 the farm was sold to two of her children. This permitted her to dabble in building the Earlton Ford selling tractors and farm equipment and later furniture refinishing. Who does not remember the “twistwristing” contests at the local sales barn and hotel. Many men were afraid to tackle her as she had won most of them.

What a great cook she was, she would whip up a meal in no time, her pies and cinnamon rolls were some of her signature deserts. The table was full, often during the summer, we could count twenty at the kitchen table for meals. Her door was always open. She was very proud of her immense gardens, raspberry patch, and the preserves she would make to give most of them away in the later years.

Thérèse was very fond and appreciative of the delicious creamy milk Basil was bringing her from the family farm. We promised to keep the garden going and collect the crab-apples in order to make that special juice Pierre loved so. She much looked forward to the telephone calls from Daniel, keeping her informed on his car dealer business. And those two little pooches, Geisha and Rufus, she just adored them as for Frances company. Thérèse would love to hear about Jacinthe and the grandchildren out West. And she was very appreciative of Nicole and Marielle who made sure she had everything she needed. What a heart she had for her children, always giving.

Her funeral mass was held on May 23rd, 11 am at the Earlton St Jean Baptiste church, Father Germain Turcotte officiating, followed by internment at the Earlton cemetery on May 24th.

Marielle I’m so sorry to hear of the padding of your mom. My sincere condolences.

Thinking of you at this
Difficult time.
May your Mom be at peace

Thinking of you at this
Difficult time.
May your Mom be at peace

Thinking of you all during this sad time.
Rest Easy Therese you where one of a kind...
So many Great memories will be shared.
She thought us all so much. Baking with her will be carried on...
RIP Miss Therese Loranger

May God bless Therese with all the gifts of Heaven.
I absolutely adored your Mom, she was a awesome, hilarious hardworking woman, I had the utmost respect for her. She had so many wonderful talents in this life and she always cared about other, Rest in Peace my Beautiful lady, you will always be in my memories and heart... until we meet again

Please accept our deepest condolences for your loss. May your Mom be at peace.

Heartfelt Condolences for the loss of your Mother and Grandmother. Therese has left behind a great family, treasured memories and life lessons that will be remembered by her family. Gone but not forgotten
RIP Therese

Sending my sincere condolences to family, She will always be in our hearts

I would like to give you my sincere deepest sympathy to the Loranger family in losing your Mother. She has now gone into a different world and dimension. May your Mother “Rest In Peace”!
Sincerely
Ms. Michelle St. Georges
West Vancouver, BC